Through a Device as a Service solution, CDW•G managed device logistics through configuration and delivery to disposal once the project was completed.

A federal agency running a major project needed to roll out mobile devices to a large number of fieldworkers across the country — and needed to do it fast and efficiently.

Before launching the effort, agency leaders ran pilots to see if they could do it themselves and discovered that managing the lifecycle of devices was a complex, costly, time-consuming headache.

They needed a partner to assist. It was a large-scale project with tight deadlines, so they turned to a Device as a Service model and hired technology provider CDW•G to purchase, configure and rapidly distribute the mobile devices to offices nationwide.

“It required months and months of preparation, planning and preconfiguration of the devices so they could all go out at once and be used at the same time,” says Randy Harris, CDW•G’s vice president of federal program management, capture and services. 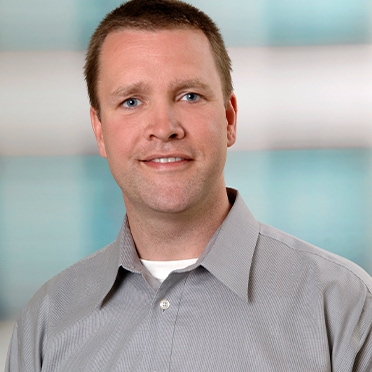 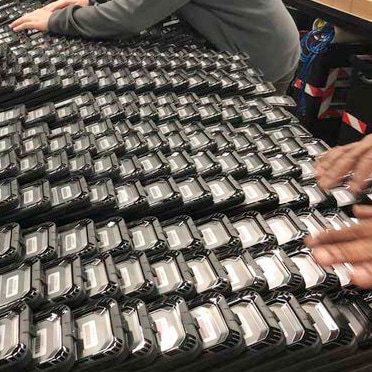 “We can get you out of the end-user device business and allow you to focus on what your true core mission is.”

Agency Benefits from Device as a Service

In its bid, CDW•G pitched its plan not as a technology project, but as a logistics project. That impressed the agency, which had found it too complicated and expensive to coordinate and manage device deployment, maintenance and disposal itself.

For a fixed price, CDW•G was tasked with obtaining, provisioning and securely delivering iPhones, iPad devices and Dell laptops to a massive number of government field employees who were dispersed throughout the country.

“We had to make sure the right device for the right job role was at the right place and ready to use out of the box,” says Jack Nichols, CDW•G’s CTO for federal and senior manager of technical resources.

When the devices were out in the field, CDW•G was in charge of maintenance and provided tier 2 help desk support; once the agency completed its project, CDW•G collected the devices, erased their data and then disposed of them.

The DaaS solution provided the agency with cloudlike benefits. It was scalable, saved money and, instead of owning the equipment, the agency essentially rented the devices from CDW•G, turning capital expenditures into operational expenses. It also freed up agency staff’s time so they could focus on innovation and executing the agency’s core mission instead of managing devices.

For this project in particular, DaaS allowed agency leaders to concentrate on planning and overseeing the major aspects of the project, from developing the software for the devices to data collection and analysis.

The agency was actively involved with CDW•G’s efforts, however. The two organizations worked closely together from beginning to end, says Scott Erickson, a CDW senior manager of configuration services.

In the early stages, the CDW team met frequently with agency staff to understand their needs. They collaborated on what devices the agency should standardize on, and during the configuration process, they talked several times a day and regularly had agency staff onsite to check on progress.

“It was a close-knit partnership with them,” Erickson says. “A lot of trust was created through the processes that we built.”

CDW•G’s technical and logistical expertise, combined with its strong relationships across a secure supply chain, made it the perfect provider for the agency’s device needs, says Brian Costello, CDW•G’s director of civilian sales.

The company took many steps to ensure the project ran smoothly. It engaged with the device manufacturers early and ordered large quantities of mobile devices in advance to ensure they were delivered to CDW•G in time for the project.

To provision the devices, CDW Configuration Services developed a 24/7 operation and deployed a dedicated staff at its configuration centers in Vernon Hills, Ill., and Las Vegas to load the agency’s software image onto the mobile devices, activate cellular service on the iPhones and iPads and test them to make sure they worked properly.

The company’s configurations team tested the capacity and scalability of its provisioning process to determine how many devices it needed to configure daily to meet its deadlines.

The time required for CDW•G to retrieve all the devices 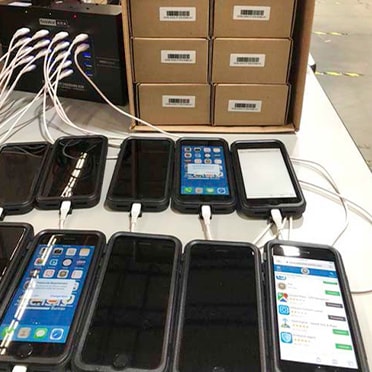 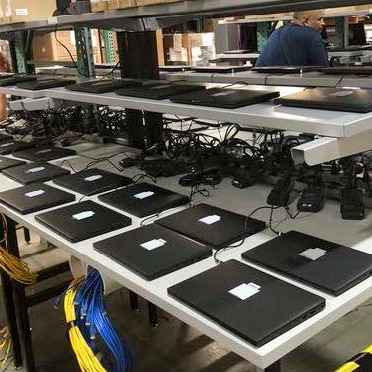 In addition, the configurations and operations teams also created new processes and workflows to squeeze greater efficiencies out of the device provisioning process. For example, CDW Configuration Services engineers collaborated closely with Apple and Microsoft to develop scripts to automate the configuration of both Apple iOS and Windows 10 devices, Harris says.

CDW•G also focused on the finer details to make sure government employees had everything they needed as well as a good user experience.

For example, some carriers offer stronger cellular coverage in different parts of the country, so CDW•G partnered with five carriers. When the team configured the devices, it chose the best carrier for each location to ensure users have the strongest possible cell signal, Harris says.

The company also installed rooftop cellular signal boosters to test and ensure that cellular service was activated on each device during provisioning.

CDW•G also shipped each iPhone in a care package that included a protective case, power adapter and car charger. The iPads were equipped with keyboards paired via Bluetooth.

“We made it ready to use out of the box,” Erickson says.

When the project launched, CDW•G delivered all the devices to every fieldworker on time, allowing the agency to conduct and complete its project.

“There is no way we could have finished without the technology,” says an agency leader who managed the project. “Device as a Service was really the hub of [our project]. It’s the technology centerpiece of our ability to get it done in the field.”

To securely deliver the devices, CDW•G leveraged its logistics operation, which included shipping partners. CDW’s logistics command center kept track of shipments and ensured that devices were successfully delivered and not lost or stolen.

“We had tight chains of control and made sure all those assets were accounted for,” says Eric Thorson, CDW’s senior project manager for configuration services.

When needed, CDW•G staff communicated with the delivery drivers and agency staff to ensure safe, on-time delivery, Harris says. In fact, in several instances, a truck driver called CDW•G to say the government office’s parking lot was empty, with no one there to take the delivery.

“Processes were put in place in the logistics command center, where we would say, ‘Hold on. Let me call them,’ and then we’d tell the driver, ‘There is one person in the office today to receive the shipment,’” Harris says. “We coordinated to make sure the logistics worked as intended.”

During the project, the agency relied on a contractor for tier 1 help desk support. But if the initial team couldn’t resolve the problem, CDW•G provided tier 2 help desk support through one of its partners, Harris says.

CDW also provided asset management services, and tracked and maintained the devices while they were in use by the fieldworkers.

During provisioning, CDW•G enrolled the devices in the Apple Device Enrollment Program (DEP), which tied every iPhone and iPad to the agency, so only agency workers could use the devices, Thorson says.

“Only intended users could log in with their agency credentials,” Nichols says. “As soon as individuals logged in, that was recorded. We had unique IDs that each individual carried, so once they logged in, we knew an individual had that specific device, and that’s how we tracked them through the MDM platform.”

The MDM software also allowed the agency to remotely update the devices with software updates, including security fixes.

When the federal agency completed its project and was done with the mobile devices, CDW•G coordinated a biweekly pickup from the agency’s offices. Most of the devices were returned to the company’s Las Vegas configuration center after four weeks, Harris says.

Eric Dahlin, CDW’s manager of configuration center delivery, says the decommissioning process had two parts: His team erased the devices, then digitally sanitized them. Data sanitization is a more stringent process to ensure that data is completely erased and not recoverable from the iPhone’s flash memory.

“We developed a process to guarantee every device went through that sanitization to ensure all the confidential information was erased,” Dahlin says.

The agency’s leader says the project was a major success. The devices worked exactly as planned. CDW•G made the entire process cost-effective and pain free, says the agency leader who managed the project.

“CDW•G has been very flexible and very mission focused, so we could do everything we needed to do,” the agency leader says.

The agency’s project showcases the benefits of the DaaS model and how other agencies or companies in all industries can take advantage of it.

Whether the project is big or small, CDW•G has the technical and logistical expertise and partnerships in place to help any organization with its device needs, says Costello.

One organization may need a full DaaS solution, while another may just need hardware procurement. Or, it could be a combination that includes configuration services, a service desk, mobile device management, and device repair and replacement services, he says.

“It’s OK if it’s any one of those things or many of them,” Costello says. “We can get you out of the end-user device business and allow you to focus on what your true core mission is.”

During the device configuration process, for example, CDW used dedicated wired and wireless networks as employees set up and installed software on the mobile devices.

“When we downloaded the apps, firmware and security policies, it was only on a network specifically for the customer. We did not share that network with any of our other customers, so there was no risk of mixing,” says Eric Thorson, CDW’s senior project manager for configuration services.

CDW installed mobile device management software on the devices, which provided extra security out in the field. The devices also required multifactor authentication, and if the devices were lost or stolen, the agency used the MDM software to remotely erase them.

During the device decommissioning process, the agency wanted CDW to erase the mobile devices in a secure location, so the technology solutions provider placed them in a caged-off area in the configuration center.

CDW’s Configuration Services team can speed deployment of new devices. Find out how the service can help your agency.