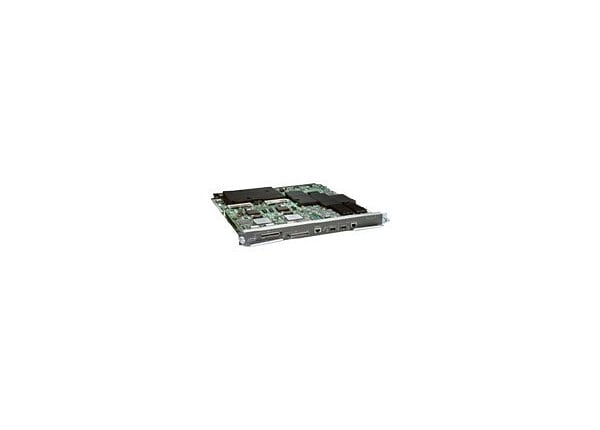 Main Features
The Cisco Catalyst 6500/Cisco 7600 Series Supervisor Engine 720 is a family of Supervisor Engines designed to deliver scalable performance and rich set of IP features in hardware. Its hardware-based feature set can enable applications such as traditional IP forwarding Layer 2 and Layer 3 Multiprotocol Label Switching (MPLS) VPNs, Ethernet over MPLS (EoMPLS) with quality of service (QoS) and security features. The Supervisor engine 720 integrates a high-performance 720-Gbps crossbar switch fabric with a forwarding engine in a single module, delivering 40 Gbps of switching capacity per slot (enabling 4-port 10GE and 48-port 10/100/1000 density line cards). With hardware-enabled forwarding for IPv4, IPv6 and MPLS, the system performance is capable of 400 Mpps for IPv4, 200 Mpps for IPv6 traffic, with features and 1024 VRFs each populated with up to 700 routes/VRF for MPLS.

The Cisco Supervisor Engine 720 offers strong security features. System security is hardened with support for features such as Port Security,