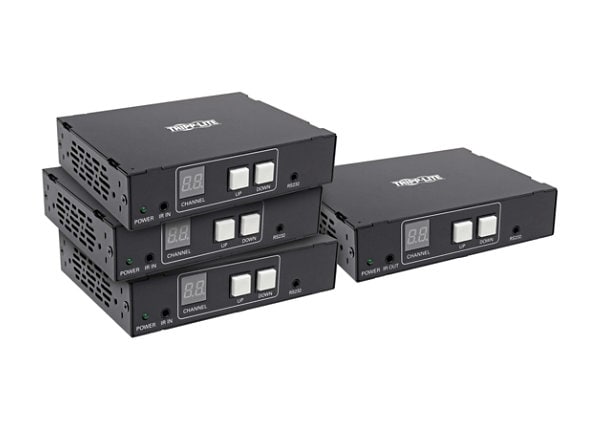 Main Features
This splitter/extender kit comes with one Tripp Lite B160-001-HDSI transmitter and three B160-100-HDSI receivers. It extends and distributes DVI or HDMI audio/video, RS-232 serial and IR (infrared) remote signals from a source device, such as a Blu-ray player or media server, to three HDMI displays via Cat5e/6 cabling. The maximum distance between a transmitter and receiver is 328 feet. However, by connecting a dedicated network switch (sold separately) in between, you can extend the audio/video as far as 656 feet (200 meters).

You can create an installation featuring multiple sources and displays by connecting a dedicated managed Ethernet network switch with Internet Group Management Protocol (IGMP), such as Tripp Lite's NSS-G16D2. By adding multiple managed switches, you can create a multi-in, multi-out installation with as many as 64 transmitters and 255 receivers. The IGMP-enabled switch will let you manage all connections for centralized control over which sources show on which displays. Note: Unmanaged switch installations are limited to two transmitter units. The number of receivers is limited to the number of ports remaining on the unmanaged switch. This transmitter/receiver extender kit is designed for use with a dedicated network switch. Connecting a switch used with other networking equipment will result in degraded or non-functional performance.

The B160-301-HDSI supports video resolutions up to 1920 x 1080 (1080p) at 60 Hz with 24-bit True Color in a managed switch installation. It extends IR signals that control a DVI or HDMI source to the remote displays, as well as RS-232 signals at serial baud rates up to 57600 bps. This allows you to operate the source device's remote control (play, rewind, pause, etc.), while standing near a receiver located up to 656 feet away. Adapter cables are included for converting DVI signals to HDMI and vice versa.

The included transmitter and receiver units work right out of the box with no software required. Mounting hardware is included for installing the units on walls, poles or 19-inch racks. Cat6 patch cable (such as Tripp Lite's N202-Series) can be used to connect the transmitter to a receiver or network switch. Connect an additional display to the transmitter's local output with HDMI cable (such as Tripp Lite's P568- or P569-Series) to monitor the image being transmitted to a remote display.

The B160-301-HDSI is compliant with the Federal Trade Agreements Act (TAA), which makes it eligible for GSA (General Services Administration) Schedule and other federal procurement contracts.