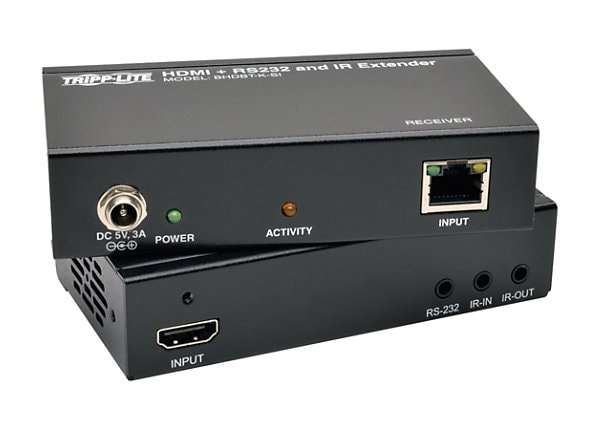 You can also control RS-232 serial devices, such as touchscreen displays or scanners, at baud rates up to 115 Kbps. The BHDBT-K-SI's 2-way IR Remote Control feature (@ 39 KHz) lets you control your Blu-ray player using its remote when at the remote monitor or control your remote monitor using its remote when at the Blu-ray player. Locking HDMI ports (ideal for use with Tripp Lite's High-Speed HDMI cables with locking connectors, such as P569-006-LOCK) on both the transmitter and receiver prevent cables from coming loose or undone, ensuring an intact signal.

The BHDBT-K-SI supports 7.1-channel surround sound, DTS-HD and Dolby TrueHD audio, as well as 3D video, EDID and HDCP. Included mounting hardware lets you attach each unit to a wall, rack or pole. There's no software to download or install, and you can have the BHDBT-K-SI Extender Kit set up and ready to go quickly. Compliant with the Federal Trade Agreements Act(TAA) for GSA Schedule purchases.