Equipped for the Long Haul of Online Teaching

Through a mix of tech investments and robust professional development, a Texas school district prepared its teachers to deliver effective remote and hybrid instruction.

In the spring of 2020, when schools across the country sent students home in response to the coronavirus crisis, Leander Independent School District went into emergency mode. The 40,000-student district, which covers 200 square miles in central Texas, abridged its curriculum, following state guidelines that called for just four to six hours of work per week for elementary students and eight to 10 hours for secondary students.

“We called it ‘emergency remote learning’ because it really was,” says Jennifer Collins, assistant superintendent for curriculum at Leander ISD. “We had the week of spring break to transition, and then we were back to a new normal. Our team worked nonstop to truncate the curriculum, and to help teachers know what teaching and learning could look like. You can’t teach all of your biology and physics content in that limited amount of time, so we tried to pick out what was essential and determine what kids could do at home.”

“Back then, we thought we were just going to be closed for a couple of weeks,” Collins adds. “We had no idea what was in front of us.”

As the weeks stretched on, district leaders began to recognize that remote and hybrid instruction would likely be central to teaching and learning for quite some time. And they knew that their emergency approach wasn’t a sufficient long-term solution.

The percentage of K–12 students who, by Election Day, were attending schools that offer in-person instruction

Source: burbio.com, “In Reversal, More Than 60% of U.S. K–12 Public School Students Will Be Attending Schools With In-Person Options By Election Day,” Oct. 21, 2020 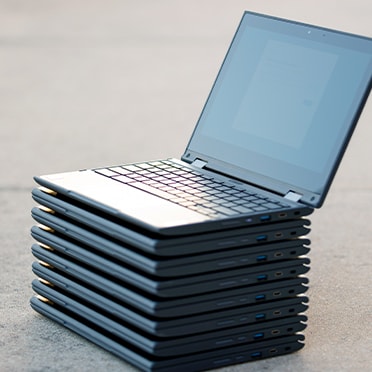 “We had to quickly deploy 5,200 or so elementary devices so they would have devices at home.”

The Right Tech for Remote Learning

From a technology perspective, Leander ISD was about as prepared for the pandemic as it was possible to be — and yet, challenges still arose around bandwidth, student connectivity, budgets and software consolidation.

At the start of the crisis, the district was essentially one-to-one with computers, although some of those devices had previously stayed in classrooms instead of going home with students. “We had to quickly deploy 5,200 or so elementary devices so they would have devices at home,” recalls Jason Miller, the district’s CTO. “Luckily, we had a large inventory of Chromebooks for the elementary students in our classrooms, and then we had inventory in the warehouse to refresh with.”

Leander ISD deployed Dell Chromebooks to all of its students in pre-K through grade five; students in grades six through 12 were already using Lenovo ThinkPad 2-in-1 Windows devices. The district also deployed mobile hotspots to around 300 students who needed the technology for remote learning.

Mike LaRocco, executive account manager at CDW, credits the district’s swift response to leaders’ careful planning. “They weren’t scrambling, really, at all,” LaRocco says. “Most districts had horror stories. But they were so much better off than everybody else, because this is something they’ve been doing for a long time.”

The district’s partnership with CDW has helped give Leander officials a broader view of what tools would best help them to meet student needs — in a hurry and on a budget.

“Instead of them having to do the research, we worked with partners from across all different manufacturers,” notes Wendy Jones, K–12 education strategist at CDW. “We’re a good resource to evaluate the district’s needs and look at what’s going on with other districts across the country.”

“It’s nice to have people you can rely on,” says Collins. “Having a partner that is going to be able to work with us on a regular basis — both when times are normal, and then also in times of emergency to think through solutions for problems we’ve never anticipated — is so important.” 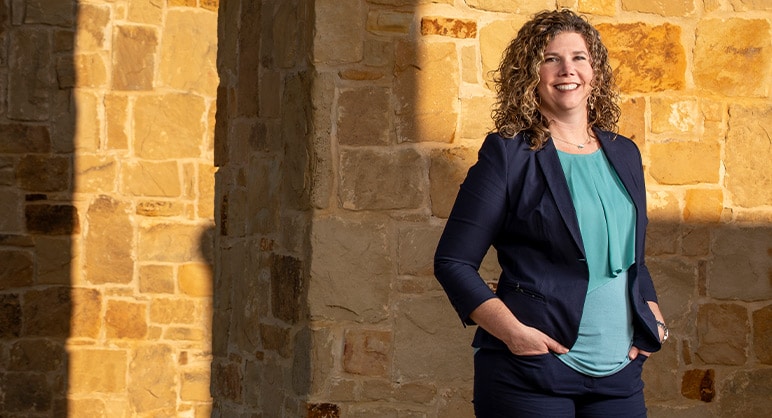 “We can create documents, resources and exemplary lessons, but unless our teachers understood how virtual teaching is different from teaching in person, it was really going to be a barrier for them.”

Successful remote learning and hybrid instruction marries devices with quality teaching. For the fall, Leander ISD officials took the same approach with professional development for teachers that they wanted teachers to take with students: They prepared interactive, meaningful professional development sessions that met teachers at their current ability levels and offered a lot of individual choice.

“We can create documents, resources and exemplary lessons, but unless our teachers understood how virtual teaching is different from teaching in person, it was really going to be a barrier for them,” Collins says.

Leander ISD rolled out a comprehensive virtual teaching academy over the summer. The academy offered both synchronous sessions (where teachers learned together in real time) and asynchronous opportunities (where teachers worked through course materials that were prepared ahead of time) — mirroring the learning opportunities that teachers would offer to students in the fall. Five modules were required, covering an introduction to virtual teaching; integration of tech tools; planning for virtual learning; building culture and community; and how to perform remote assessments and offer online feedback. But teachers also had their choice of many other sessions, including several that were prepared by curriculum leaders at individual school sites.

“Asynchronous didn’t mean sit and watch a recording,” Collins says. “It meant go through the experience with your professional learning community. We really tried to be intentional in providing opportunities for teachers to come together and talk to one another. It was really positively received by our teachers. Everyone knew that they needed support for this.”

Emerging on the Other Side

This fall, remote and hybrid instruction at Leander ISD has been characterized by student collaboration, hands-on learning activities and thoughtful discussions. Initially, district leaders thought some portion of their students would begin the year in their physical school buildings. But instead, conditions forced the district to begin completely online and shift toward a hybrid approach after several weeks — with some classes being taught completely in person, some being taught completely online and some being taught using both models.

“Teachers are having to re-create the wheel and having to be really innovative in their teaching practices,” Collins says. “They’re doing 10 to 12 hours of planning, as though they were first-year teachers again. I’m so proud of the teachers, who are willing to try new things. They aren’t afraid of giving it a go, and I think they are a lot more collaborative than they’ve ever been.”

Teachers have found new ways of getting students to work together, Collins says. For example, in some classes, students can perform steps in lab experiments only after receiving directions from their remote partners.

Tech has been key to the district’s success. Students are getting online with mobile hotspots, connecting with their classes via laptops and collaborating with Google Classroom. “Having that single platform has been a game changer,” Collins says.

Looking ahead, district leaders see the potential to keep online learning as a key part of their instructional model. “Before this, we wouldn’t have been able to turn the remote model on as quickly,” says Miller. “Now, we’re becoming more efficient and experienced at it. There’s talk about some school districts perhaps keeping the virtual model up even after the pandemic.”

“I do think we’ll have some students who find that virtual learning works for them,” Collins says. “And public education as a whole is going to have to figure out what virtual learning looks like for students who want to participate in that model. I think our teachers have learned to rely on each other more than ever before, and I hope that is something that will stick around forever.”

Online Learning: By the Numbers

Source: pewsocialtrends.org, “Most Parents of K–12 Students Learning Online Worry About Them Falling Behind,” Oct. 29, 2020

Learn how CDW can help your organization design and manage your technology environments.