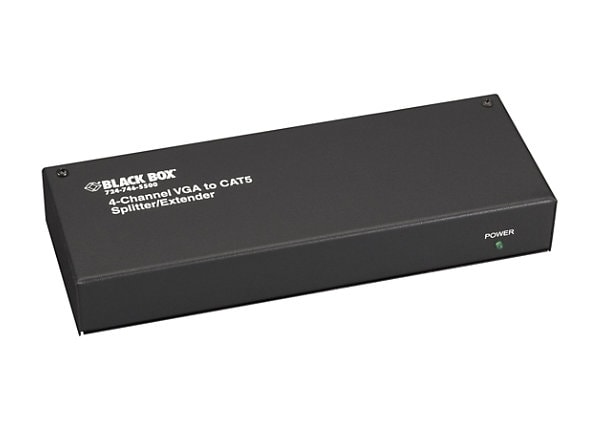 Features:
Buffer and boost signals for a clear video image.

Say goodbye to bulky, expensive, and difficult-to-terminate VGA cable. Now you can set up video monitors up to 500 feet (152 m) from your PC or video source by using ordinary lightweight CAT5 UTP cable.

Mini CAT5 Extenders and Mini CAT5 Splitter/Extenders enable you to easily place video displays such as monitors or LCD screens where you need them to display information such as schedules, menus, or advertising.

They’re easy to install. Just plug a standard CAT5 cable, up to 300 feet long, between the two units. A pair of extenders requires only a single power supply, which can be plugged at either end of the link. The extender/splitter requires a power supply at the transmitter end only to power a link to all connected receivers.

These devices support a distance of 300 feet (91.4 m) at resolutions of 1600 x 1200. Greater distances are supported at lower resolutions—for details, call our FREE Tech Support.

Mini CAT5 Extender Kits
• Low-cost, single-channel extenders for sending video signal over CAT5 UTP.
• The VGA kit formats a PC’s VGA signal for CAT5 transmission and converts the signal back to VGA for connecting a monitor or other display device at the receiver end.
• The Component kit enables extensions between DVD players or other Component (RGB or Y-Pb-Pr, or Y-Cb-Cr) devices and compatible displays, such as HDTV monitors.