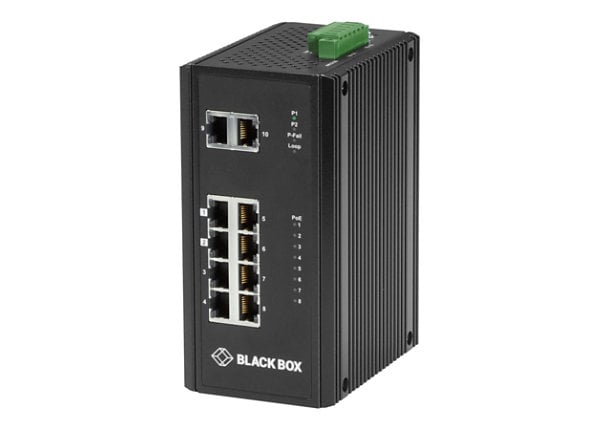 Main Features
Unlike the Ethernet switches in your wiring closet or computer center, the switches at the edges of your network have to withstand extreme temperatures and conditions. This is where the Industrial Unmanaged Gigabit Ethernet PoE+ Switch from Black Box comes in. This extreme industrial switch features eight autosensing 10-/100-/1000-Mbps PoE/PoE+ 802 af/at copper ports and two Gigabit copper ports. Use this rugged switch in harsh environments with temperature extremes of -40° to +75°C, such as loading docks, remote monitoring stations and industrial facilities.

Use the switch's eight PoE ports to power remote PoE/PoE+ PSD devices such as security cameras, traffic signals, wireless access points, building access devices and automation equipment in areas where it may be difficult to run electrical wiring. The switch is built for extreme environments with uncontrolled temperatures of -40 to +167° F (-40 to +75° C). The rugged IP30 metal case is sealed to resist contaminants such as dust, dirt and moisture and can be DIN-rail or wall mounted.

For redundancy, the switch has two 12-24 VDC power inputs with a P-fail relay. If one power source fails, the switch automatically falls over to the second power source. The switch also has a P-Fail LED which, in the event of a power failure, will activate the alarm to notify administrators.

The switch supports jumbo frames up to 9,216 bytes.