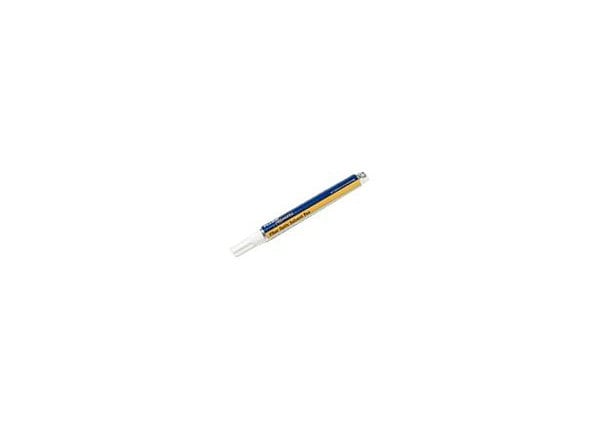 Main Features
Contaminated end-faces are the #1 cause of fiber link failure. Dirt and contaminants cause insertion loss and back-reflection that inhibit the light transmission and causes havoc with transceivers. Since dirt can migrate from one end-face to another upon mating, both sides of any connection must be inspected. Mating contaminated connectors can cause permanent damage as microscopic debris can be crushed between end-faces during physical contact. For years, isopropyl alcohol (IPA) was used to clean fiber end-faces but now there are customized solvents that are far superior, such as Fluke Networks Fiber Optic Solvent Pen. Most importantly, this specialized solvent is more effective than IPA at dissolving all contaminants, especially non-ionic compounds such as buffer gel and pulling lube. You will get a better clean every time and remove more contamination. The Fluke Networks Solvent Pen has a lower surface tension that allows it to envelop particles and debris, thus effectively lifting them from the surface of