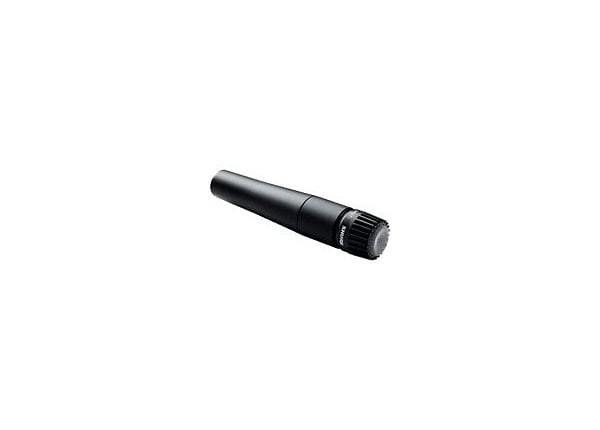 Main Features
What gives the SM57 the reputation of a workhorse? Maybe the fact that the Shure SM57 is versatile in application, durable, and reliable. It has been used by the President of the United States for the past 30 years, and put to the test on stage and on tour by artists such as Stewart Copeland, AC/DC, and the Stone Temple Pilots, as well as famed producer Daniel Lanois, to name a few. It can be dropped down six flights of stairs then dunked in a glass of water and still perform like it just came out of the box (please don't try this at home).

The SM57 has become a standard in the musician's arsenal thanks to the extremely effective cardioid pickup pattern, which isolates the main sound source while minimizing background noise. It is ideal for close miking: guitar and bass amps; snare drums, toms, and congas; and brass instruments. The SM57 performs great on stage and in the recording studio.

Ask most any recording engineer what the best microphone is for miking a snare drum and their answer will be the Shure SM57. Many believe that it is the baseline standard microphone for recording instruments.

The SM57 demonstrates its versatility by also being ideal for vocal applications. Michael Jackson used the SM57 to record the famous Billie Jean in 1982; Cyndi Lauper sings into the SM57; and President Bush is still speaking to the country with the SM57.

The SM57 is ideal for night-after-night touring and is deserving of its workhorse designation. But, if you really can't relate to Michael Jackson, Cyndi Lauper, Stewart Copeland, AC/DC, Stone Temple Pilots, or the President of the United States, take it from consumers like yourself. Most people consider this to be the most versatile mic in their arsenal.